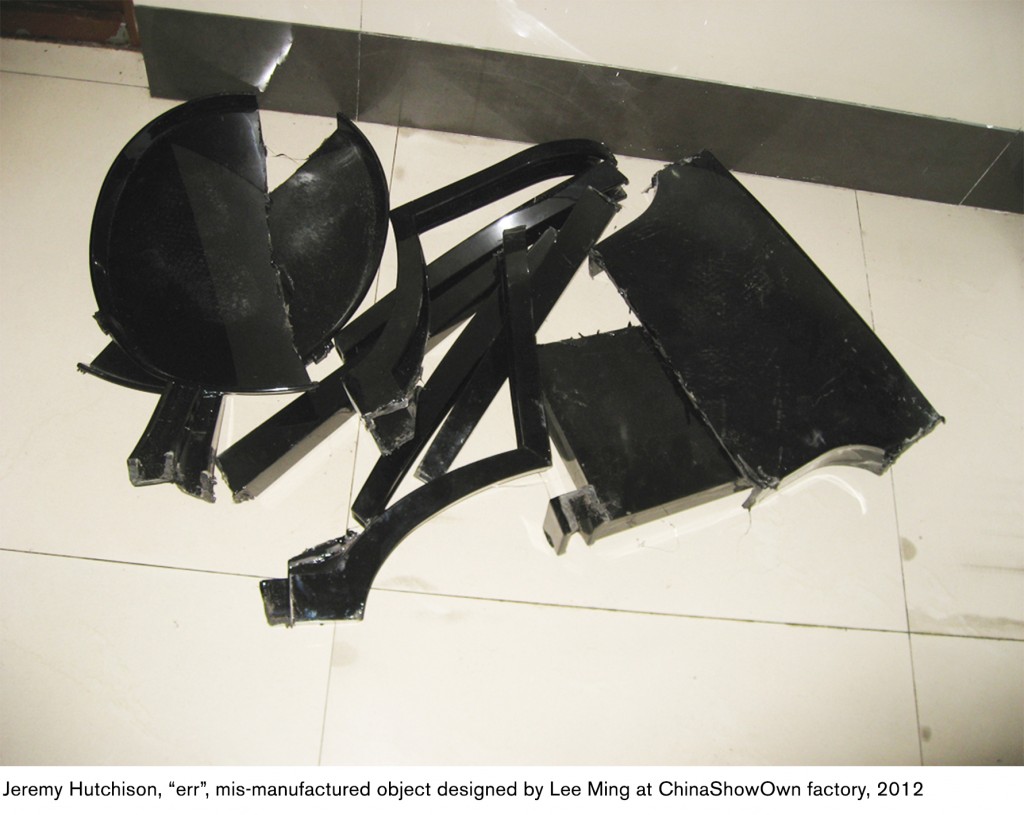 Art:Work, curated by Jessica Gallucci, is a group exhibition featuring artists who critique, comment upon or subvert systems of labor, commerce or entertainment, often from the inside by going undercover, operating as non-artists in those arenas, or by adopting occupational frameworks native to those systems. It includes works from Jeremy Hutchison, Liz Magic Laser, PJ Linden, Sarah Alice Moran, Narcissister, Sarah Stuve and Philip Vanderhyden.

Much of the art in this exhibition relates to the scholar Julia Bryan-Wilson’s definition of occupational realism: work “in which the realm of waged labor (undertaken to sustain oneself economically) and the realm of art (pursued, presumably, for reasons that might include financial gain, but that also exceed financialization and have aesthetic, personal, and/or political motivations) collapse, becoming indistinct or intentionally inverted. These are performances in which artists enact the normal, obligatory tasks of work under the highly elastic rubric of ‘art.’ Here, the job becomes the art and the art becomes the job.”

Liz Magic Laser lives and works in Brooklyn. Her performances and videos intervene in semi-public spaces such as bank vestibules, movie theaters and newsrooms and have involved collaborations with actors, dancers, surgeons and motorcycle gang members. Her recent work appropriates the dominant performance techniques and psychological strategies used by the media and politicians to sway public opinion. Laser earned a B.A. from Wesleyan University and an M.F.A. from Columbia University. She attended the Skowhegan School of Painting & Sculpture and the Whitney Museum Independent Study Program. Recently, her work was the subject of solo exhibitions at Paula Cooper Gallery, New York; the Westfälischer Kunstverein, Münster, Germany; DiverseWorks, Houston, Texas and Mälmo Konsthall, Mälmo, Sweden.

PJ Linden and Sarah Stuve are a Brooklyn-based artist-filmmaker duo working under the name Wonderpuss Octopus. Together, they have collaborated on a range of commercial and fine-art film and video projects.

Sarah Alice Moran is a painter and a native New Yorker. She received a B.A. in fine art and art history from Bowdoin College and an M.F.A. from the Massachusetts College of Art and Design. She currently lives and works in Red Hook, Brooklyn.

Narcissister is a Brooklyn-based artist and performer working at the intersection of performance, dance, art and activism. Narcissister’s work integrates prior professional dance and commercial art experience with long-standing visual art practices in a range of media including photography, video and experimental music. She has presented work at The New Museum, PS1, The Kitchen, Abrons Art Center and in many nightclubs, galleries, alternative spaces and international exhibitions.

Philip Vanderhyden is an artist living and working in New York. Vanderhyden earned an MFA from Northwestern University in 2004 and a BFA from the University of Wisconsin, Madison in 2001. Vanderhyden has exhibited extensively nationally and internationally. His work and projects have been reviewed in Art in America, Artforum, and The New York Times, among others. Vanderhyden recently concluded a three-year project of forensically reconstructing the work of the late artist Gretchen Bender at venues such as The Poor Farm in Little Wolf, Wisconsin and The Kitchen in New York. He also participated in the 2014 Whitney Biennial. His most recent video works, “Pay Your Future Self First” and “Volatility Smile” have been shown at Southfirst Gallery and Signal Gallery in New York, and Artspace, Sydney among others.