“And what is the purpose of writing music? … The answer must take the form of a paradox: a purposeful purposelessness or a purposeless play. This play, however, is an affirmation of life—not an attempt to bring order out of chaos nor to suggest improvements in creation, but simply a way of waking up to the very life we’re living, which is so excellent once one gets one’s mind and one’s desires out of its way and lets it act of its own accord.” 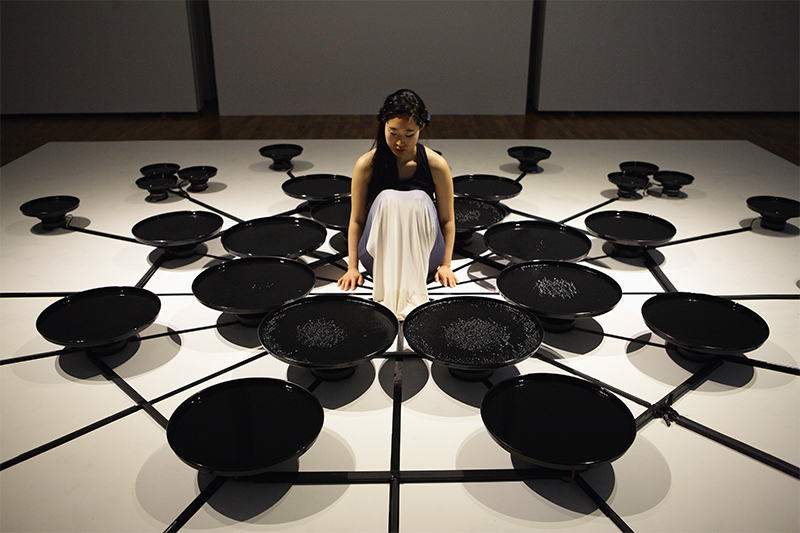 OPENING FRIDAY, MAY 8TH, 7 – 9 PM, REVERSE will present two interactive, experimental artists’ projects that employ novel technologies to mediate, augment and echo our experience of the world around us. Their effects are both trans-sensory—as shapes become sounds—and revelatory—as brain waves become both audible and visible. The result, in both cases, is a strange new music.

Lisa Park’s Eunoia II, which she has developed at the New Museum’s NEW INC incubator, is an investigation into a new form of expression and shared experience by visually reflecting the vibrations of the mind on the surface of water. Spreading across the floor in the rear of the gallery, a networked group of 48 speakers – all containing pools of water – are connected via Bluetooth to electroencephalogram (EEG) headsets, which are worn by up to two visitors at once. The EEG headsets track changes in visitors’ brainwaves, and the data is sent to a computer, where custom-written code is used to calibrate volume, pitch and panning, and translate those values into sound. The audio output is played through the speakers, causing distinctive ripples and vertical spray in the trays of water resting atop each speaker. The result is an audio-visualization of participants’ emotions, with the potential to see the real-time synchronization of individuals’ brain activity as they respond to neurofeedback. Colin Harrington and Amar Lal contributed to Eunoia II as an audio engineer and a sound programmer, respectively.

Park will also introduce a mobile application that creates custom data visualizations based upon individuals’ experiences with the EEGs. The app is in development with programmer Ji-Hyun Lee as part of Eudaimonia, the next iteration of this project.

Danish-born artists Louise Foo and Martha Skou present Format No. 1 for the first time in the United States, following its March debut in Copenhagen. Their stark geometric wall sculptures in the front of the gallery form a striking visual tableau that also functions as a score. Visitors can scan the walls using a specially designed smartphone application, created in collaboration with programmer Johann Diedrick, that translates visual information to sound. The image-to-sound algorithm used in the application, and the three-dimensional score itself, are organized around a time vs. frequency methodology, in keeping with traditional sound mapping techniques. The wall is an open score meant to allow the participant an intuitive, personal and transformative experience.

Lisa Park has an MPA in interactive telecommunications from New York University’s Tisch School of the Arts. Park is a current member of NEW INC, the New Museum’s first museum-led incubator in art, technology and design. She was recently awarded the New York Foundation for the Arts 2014 fellowship in the category of Digital/Electronic Arts.

Louise Foo holds an MPS in interactive telecommunications from New York University’s Tisch School of the Arts. She is a 2012 recipient of a Fulbright Ministry of Culture Award. She is a current fellow, with Marth Skou, at the New York Art Residency And Studios Foundation. The duo will begin a residency at Pioneer Works in Brooklyn later in 2015.

Martha Skou holds an MA in visual communication from the Royal Danish Academy of Fine Arts, School of Design. She is a current fellow, with Louise Foo, at the New York Art Residency And Studios Foundation. The duo will begin a residency at Pioneer Works in Brooklyn later in 2015.

Read more about SYNAESTHETICS featured in Hyperallergic, Bedford + Bowery and The Creators Project.