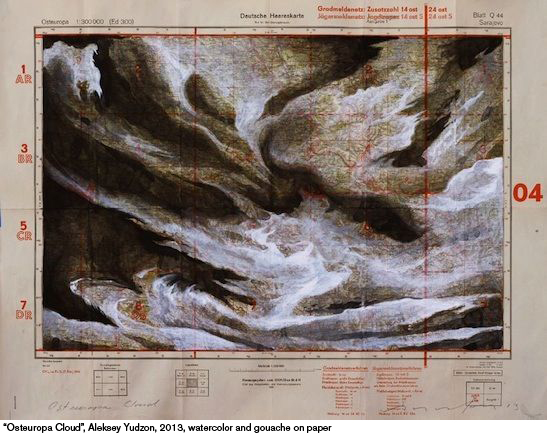 Uncharted Waters: REVERSE 2013 features work in a variety of media, including installations by Melissa F. Clarke, Daria Irincheeva, and Serra Victoria Bothwell Fels, two-dimensional works on paper by Alex Yuzdon and collaborative duo Brandon Friend and Jason Douglas Griffin, and video projection by ChiKA. While formally different, these works demonstrate a shared interest in investigating unfamiliar topographies and the creative challenges of visualizing places that have yet to be discovered.  Through the appropriation of old maps and travel images or the translation of cartographic postulations into three-dimensional spaces, the works presented in Uncharted Waters: REVERSE 2013 explore novel ways of traversing the boundaries of our everyday environments.

Working at the intersection of science, technology and art, Melissa F. Clarke’s “neolandscapes” dissect and re-inform the way we think about data, nature and experimental art. Her work, Ice Gouge, suggest alternative methods of depicting and understanding geographic entities.  Composed of glass and generative video projections, Ice Gouge evokes the asymmetrical form of glaciers as they transform over time into water. Having just returned from the Arctic, in her new work Sila, Clarke creates images taken from a generative video that composites and morphs thousands of images of ice and the arctic using custom algorithms. The work goes through cycles of recognizable images into washes approaching nothingness.

CHiKA’s video sculpture, like Clarke’s Ice Gouge, evinces a penchant for incorporating new technologies into the process of graphing spatial knowledge. CHiKA is an interactive visual artist and an educator. Her work features a minimalist geometric visual narrative in sync with the sounds of live music performance in addition to interactive projection mapping installations that explore the relationship between visual, light, sound and public audience.  Her latest and ongoing project, Shikaku, is a Japanese homophone that translates to “four square”, “visual”, “optic angle” as well as “blind spot”. Embracing these themes and variations, Shikaku 05 at REVERSE is a small-scale video sculpture combines origami shaped screens with interactive projection mapping.

Other artists featured in Uncharted Waters: REVERSE 2013 concentrate on the self as the central locus towards which their work seeks to navigate. In their celebrated piece Identity Crisis, collaborative duo Brandon Friend and Jason Douglas Griffin explore identity conflict through individual and collaborative portraits of social uprising and self-determination. Friend and Griffin use mediated pop culture imagery as the foundation for their iconic characters. In their artworks, the two artists provocatively deconstruct and rearrange pictorial information extracted from the media to communicate their perspective. Working with found objects, collage, and paint washes, and using print-making, image transfer and silkscreen printing techniques, they achieve a unique detailed multi-dimensional and richly layered aesthetic.

Having emigrated from the former Soviet Union to the United States as a child, Aleksey Yudzon is interested in the way we define home and the borders that separate one place from another. Yuzdon’s drawings engage the notion of ambiguity in the context of maps, thereby subverting their intended function. In his Atlas series, Yudzon paints transparent watercolor cloud formations over sheets of an old almanac obscuring the known landscape with fantastical mists and curious vapors.

Also born in the former Soviet Union during the Perestroika period, artist Daria Irincheeva witnessed the fall of the socialistic regime and the birth of capitalism crashing unevenly upon the ruins of the collapsed system. This “failed dream” inspired Irincheeva’s interest in the notion of “claustrophobic dreaming”: having to acknowledge the possibility of constant letdown. Irincheeva’s recent work focuses on the theme of reconstruction. She sees events, people and occasions in her life as small construction sculptures that can be put up and destroyed very easily. It’s a constant game with no end, as if the beauty is in the process, and the desire for better itself but is not in the potential successful or collapsed result.

Serra Victoria Bothwell Fels’ installations and “blueprint” paintings explore our ability to create new geographies. Fels constructs large-scale installations assembled from wood discarded from construction sites or salvaged from the remains of demolished houses, giving the installations, which range from geometric studies to full-scale tree houses or candlelit shacks, the impression that they’ve been there for decades. Typically located in abandoned spaces and interiors, her work converts the space it inhabits into a strange new world.

As of 2012, Fels has begun creating installations by first painting small, fantastical ‘blueprint’ paintings that abstract and compress geometric representations of forms. Loosely combining concepts from the paintings with a site’s specific geography, she builds towards particular feelings and moments that subtly form people’s experiences within the installation.

Uncharted Waters: REVERSE 2013 will run from April 12th until May 12th at REVERSE, located at 28 Frost Street, in Williamsburg, Brooklyn on the ground floor.  REVERSE will host an opening reception on Friday April 12th from 7 to 10 pm.